With a wealth of knowledge, and breadth of experience, Liza Grobler’s visual art installations create dialogues with the spaces in which they are displayed. She blurs the traditions of craft and fine art, breathing new life into discarded, mass-produced materials through traditional craft techniques like crochet, beading and weaving. Living in Cape Town, South Africa, she has been working as an artist, and educator since 1999, when she attained her Master’s Degree in Visual Arts (cum laude) from Stellenbosch University.
Liza has taken part in residency programmes in Chicago, USA, and Mexico. She views residencies as an opportunity to explore new physical places, meet and interact with artists and locals in a new environment to unravel great ideas, as collaboration is an integral part of her process, and create as many visual interventions as possible. For her thought-provoking, collaborative and eclectic portfolio, the Africa Center awarded Liza Grobler with a residency at Khoj International Artists’ Association, in Delhi, India. 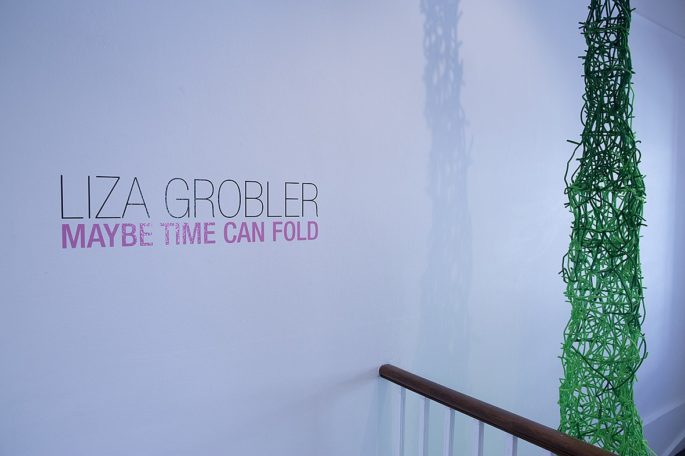 Grobler undertook her residency at Khoj over a period of 2 months in 2016 (mid-August to early October). She interacted and collaborated with artists and creative practitioners to create a large body of work that fed into an exhibition in March 2017, at the CIRCA Gallery in Cape Town titled ‘Maybe Time Can Fold’: her second solo exhibition at the gallery, and the product of what she described as “one of the most remarkable experiences [she’s] had in [her] artistic career, serves as a connection of different bodies of artwork, which cross reference one another; traces of interactions that linger in the projection we commonly refer to as “reality”.