Prior to receiving our residency award to Nafasi Artspace in Dar es Salaam Tanzania, Francois Knoetze amassed a diverse visual arts portfolio, and a refreshing aesthetic perspective on garbage. Finding ways to creatively repurpose and represent garbage through a broader system lens, Knoetze’s artistic expression was born from growing up in Grahamstown, South Africa, where he learned to value seemingly useless objects from watching his grandfather repair broken appliances. He describes his work as an attempt to engage with the social, political and economic counter-narratives to which trash is inextricably bound. 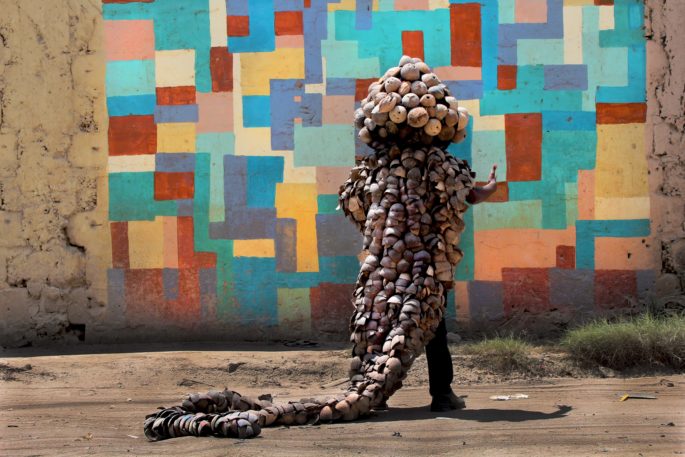 Recounting his experience as a positive one that helped him work through a creative rut and explore new ways of making, Francois Knoetze went into his residency at Nafasi Artspace in August 2017 with the expectation of meeting and collaborating with artists and performers. His expectations were met, and the product of his two month endeavour was The Great Circle; a series of sculptural costumes, photos, interviews, found footage and performances. The title of said series refers to the practice of navigating a vessel along the shortest distance between two points on a sphere. The series features the character of a grounded drone which has deviated from its function, navigating ways of seeing and representing through participatory storytelling, rather than remote surveillance. Narrative and choreographic material for The Great Circle was devised in collaboration with the Muda Africa dance troupe and local artists, writers, tour guides and drone enthusiasts. It plunges into drone culture in Dar es Salaam, drawing links between colonial surveillance projects and contemporary grassroots drone mapping.

Through improvisational performance, public encounters, interviews and found footage montage, the series provides a playful counterpoint to harmful stereotypes of the continent. It attempts reflexively to critique the artist’s own positionality and lens, while foregrounding the personal narratives, lived experiences and subjectivities of the performers. The Great Circle is a psychogeographic sketch of Dar es Salaam which winds its tangled, twisting route through reveries and evocations, deliberately straying from the direct linear course of the great circle track.