As a creative intellectual, Khanyisile Mbongwa practices the performative installation. She is an artist and curator that lives and works in Cape Town. Here is a preview of her activities while in residency at Jiwar earlier this year. 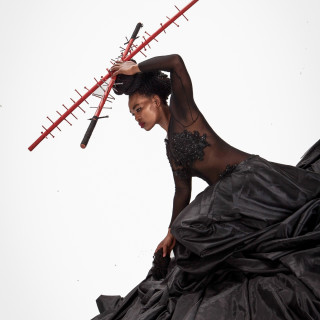 2014 was a significant year for South Africa as we entered 20yrs of democracy and the death of our first black president Nelson Mandela brought to the shore critical questions about the country’s vision of equality and a utopian rainbow nation.

South African born artist looks at how the creative process can begin to open up spaces for critically engaging and negotiating the aftermath of a violent history – and a reality that serves as intimate bridge systematic and institutional forms of oppression.

“O my body, make me always a woman who questions…my body” Junot Diaz

The artist agrees with the sentiment that all forms of narratives are fictions. That the lines blurred between what is real and not real does not mean the cerebral symbolic subject – in terms of Lacan’s theory – is irrelevant. Lhola Amira introspects her own reality whilst in-conversation with the works of South African born artist Khanyisile Mbongwa, drawing parallels on ideas of race, gender, sexuality, class and performativity.

Performance in public space. “Umnikelo Oshisiwe. The burnt offering. A sacrifice, a cleanising, a purification.”

I have no bull, sheep, goat or pigeons to offer as the sacrificial animal demanded by God. So I offer this Black (human) body as the ULTIMATE sacrifice – for cleansing and purification that will appease Whiteness. Jesus, the ultimate sacrifice – was not enough… now I am offering the self as a sacrifice.

Coming from a biblical perspective, I have a fraught relationship with religion… throughout my childhood, I have been surrounded by biblical and religious imagery which has played an integral part in my up-bringing. Within the historical context of the Christian religion, the black body has always been a site of contestation. Fanon writes ‘the world rejects me on the basis of colour prejudice’ – black is also rejected biblically with the story of Cush. The black female body is doubly subjugated.

11 A woman should learn in quietness and full submission.

12 I do not permit a woman to teach or to assume authority over a man; she must be quiet.

13 For Adam was formed first, then Eve.

In biblical terms the ritual of ‘offerings’, can also only be performed by men. Yet black women still describe themselves in the image of CHRIST even if racism and sexism denies them that dignity. For missionaries, women were the key to converting into civilized Christian societies; missionary religion therefore places the black female body as the ultimate ‘other’ – the ‘other’ by virtue becomes the indigenous second sex.